Mourning Baby Elephant Rescued After Mother Is Killed By Poachers 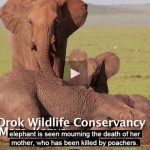 AN ORPHANED baby elephant has been rescued after her mother was killed when a poacher’s poisoned spear struck her in the face.The 10-month-old animal, named Roi, was distressed and would have died without her mother’s milk.The youngster was manoeuvred away from the herd in Kenya’s Masai Mara National Park, tranquillised and put on a plane. Roi was taken to The David Sheldrick Wildlife Trust Elephant Orphanage in Nairobi National Park – where trained keepers are now caring for her.