More Than 30,000 Elephants Are Killed Every Year. These Are The People Working To Save Them 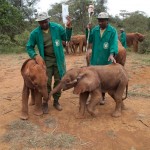 More than 30,000 elephants are killed per year for their ivory. The number would probably be higher, if it weren’t for the diligent work of conservation organizations in Africa that are dedicated to protecting and preserving the endangered and threatened species.

Just last week, a newborn elephant who had followed a herd of cows became separated from his family and had to be airlifted from a remote region in Northern Kenya during a striking rescue mission. The team behind the operation — from the Kenya-based David Sheldrick Wildlife Trust — has saved and rehabilitated countless orphaned elephants who would have otherwise perished in the wild.

In honor of World Elephant Day, here’s a look at how the Trust conducts its challenging rescue missions: This year the charity has already rescued six orphaned elephants. An elephant is comforted by caregivers during a rescue operation. The organization often uses aerial surveillance to monitor herds of elephants and protect them against poaching activities. Any lone calves are also more easily spotted. A team transfers an elephant in Northern Kenya. If an orphaned elephant is found in an remote region, rescuers must charter an airplane in order to transport the calf to the organization’s nursery. In certain cases, medical treatment must be provided at the scene of the rescue. An elephant lies in a nursery stable after a rescue.
Rescue teams use blankets to mimic the mother’s undercarriage (during feeding time) for the youngest rescues.
A worker prepares to take an x-ray of an elephant with an injured foot. Once at the rehabilitation center, rescued baby elephants are placed with other orphans to help them overcome trauma.