Meet Jonathan, The Oldest-Known Animal In The World 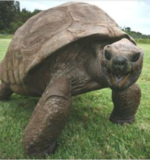 The year was 1832 — and Jonathan the tortoise was just a tiny hatchling.

The world was a very different place back then; the lightbulb had yet to be invented, and cars were still half a century away. But Jonathan, who is a Seychelles giant tortoise, lived to see it all.

This weekend, he celebrated turning 190 with a “cake” made of fresh vegetables, and the title of oldest-known animal in the world. But while the world has transformed rapidly around him, Jonathan is still living a relaxing life on the remote island of St. Helena in the South Atlantic, where he’s been since the late 1880s.

Teeny Lucy, the chairperson for the local SPCA, is one of his main caretakers. Jonathan lives on the lush grounds of the historic governor’s mansion, where Lucy and several others visit with him throughout the week with fresh veggies.

“Jonathan is an icon here,” Lucy told The Dodo in 2019. “He is a grand old gentleman who has seen it all. He landed on St. Helena in 1882 as a fully grown adult; he has seen generations of people coming and going.”

Jonathan’s longevity has certainly surprised a lot of people, Lucy said. He’s the oldest member of his companions at the mansion, who consist of three other giant tortoises, David, Emma and Fred; the second-oldest tortoise is his friend, 82-year-old David.

Jonathan is likely fully blind and has lost his sense of smell, but he still makes his way around very well. He typically spends his days lounging in the sun, munching on grass and relaxing with his tortoise friends.

“In spite of his age, Jonathan still has good libido and is seen frequently to mate with Emma and sometimes Fred,” Joe Hollins, one of Jonathan’s veterinarians, told the Guinness Book of World Records. “Animals are often not particularly gender-sensitive.”

It’s a very calm life for someone of such status; he’s so popular that his portrait is even on the back of the small island’s five pence coin.

Jonathan being presented with his 190th birthday cake at Plantation House today. Delivered to him by the wonderful staff of Plantation that care for him for a day-to-day.#Jonathan #birthday #sthelenaisland pic.twitter.com/DxnOPYroNT

“Being the oldest land animal in the world, he has almost royal status here,” Lucy said. “He is dignified and interacts in a friendly way as long as people move slowly around him. We are all very fond of him.”

Jonathan is surely a happy and social guy — but a few years ago, he started having medical issues. Fortunately, all it took was a little diet change, and now he’s back in great shape and still going strong, Lucy said.

“We started feeding Jonathan on a weekly basis a few years ago to supplement his grass diet and boost his nutrition,” she said. “This was because the island vet realized that his beak (that he scythes grass with) was soft and crumbly and that he was too cold and had lost weight. All that has reversed now and he is as fit as a fiddle!”

While Jonathan has surely seen his fair share of different caretakers over the years, it’s clear he appreciates them all the same — as long as they bring him his favorite snacks of cabbage, cucumber, carrots and seasonal fruit.

“He knows my voice and he knows the vet’s voice and reacts by walking toward us,” Lucy said. “It’s all about the food!”