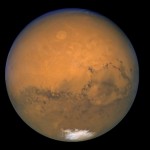 Once every 26 months, the Sun, Earth, and Mars form an almost-perfectly straight line and the planets will be in opposition. This event will happen next on April 8 and the Red Planet will appear 10 times brighter than the brightest stars in the sky. Even if you live in an urban area and typically don’t do any stargazing because of light pollution, you should be able to see Mars fairly easily.

What’s even cooler is that on April 15—the same night as the total lunar eclipse—Mars will make its closest approach with Earth. At this point, the two planets will be a (relatively) mere 92 million kilometers (57.2 million miles) away. That night is definitely one to head to an open field with your binoculars or telescope and take in the sights. Even though Mars will be visible to the unaided eye, the polar caps and other Martian features will be easy to spot with some assistance.

The reason the doesn’t happen at opposition because planetary orbits are elliptical, not circular. Though the orbits are going in the same direction, Earth is traveling around the sun at a faster rate and is essentially lapping Mars once every 26 months. This doesn’t always happen in the same location, which is why opposition and closest approach are typically two separate events. On August 27, 2003 the closest approach of Mars was the nearest it had been in almost 60,000 years, coming within 55.8 million kilometers (34.7 million miles) of Earth.

We’ll be posting reminders closer to the actual date, but if you miss Mars in opposition due to weather or any other circumstance, you should be able to see it all month long.