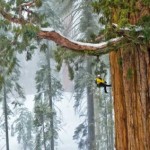 Photograph by Michael Nichols
Giant sequoias live at high elevations, enduring cold, heavy snows, lightning strikes—and growing bulky and strong, though not so tall as coast redwoods. This individual, the President, is the second most massive tree known on Earth.