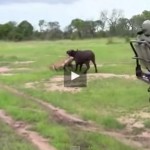 A LIONESS performs an acrobatic leap as she attempts to bring down a buffalo in the Londolozi Private Game Reserve in South Africa. Her sister chased down a young buffalo, but had done little more than slow it down, when the lioness appeared from nowhere to deliver what almost turned out to be the decisive blow. The predator launched herself at the oncoming beast, with no regard for the injuries she had sustained at the hands of male lions a few weeks earlier. Her astonishing leap enabled the two lionesses to get a throat hold – but the victory proved short-lived, as the buffalo herd soon arrived to rescue the stricken creature. As the sound of angry hooves grew closer, the lionesses decided the game was up and retreated to a safe distance.