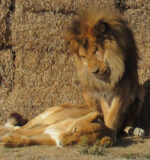 Leo and Muñeca have known each other for nearly their entire lives. The pair of lions and their children were rescued from a circus in Peru in 2014 by Animal Defenders International (ADI). They were briefly separated during their rescue, but other than that, they were rarely ever apart.

“Leo and their sons, Chino, Coco and Rolex, were successfully removed during a raid on the first day of the mission in August 2014, but the circus blocked the seizure partway through and then went into hiding,” Jan Creamer, president of ADI, told The Dodo. “ADI caught up with them six months later and over 600 miles away, saving Muñeca and their daughters, Africa and Kiara … They were almost always together, exploring their 4-acre habitat and resting together under the trees.”

In August, Muñeca suddenly fell ill — and Leo immediately became even more protective over her than he already was.

“Leo has always watched over Muñeca, but when she became unwell, he clearly realized something was wrong,” Creamer said. “He was seen trying to encourage her to her food, and appeared to comfort her.”

While she was sick, Leo stood watch over Muñeca, and even cuddled her to try and help her feel better. In those moments, it was clear just how much the pair loved each other, a beautiful example of the way lions express their love.

“We have seen the closeness between lion companions and the bonds they share on many occasions,” Creamer said.

Studies have shown that lions cuddle each other to strengthen their social bonds, and Leo and Muñeca were caught cuddling many, many times during their years together.

Sadly, Muñeca passed away in September at 19 years old. Leo stayed by her side until the very end, and she left this world knowing exactly how loved she was by him.

Leo’s rescuers have been keeping a close eye on him as he mourns the loss of his beloved Muñeca. He’s been getting lots of extra treats and attention to help him cope. Even though losing Muñeca was heartbreaking, watching the way Leo cared for her was such a beautiful moment that everyone around him will remember for years to come.