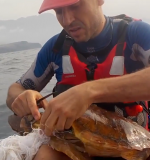 Video captured off the coast of Gran Canaria shows kayakers rescuing a sea turtle which had become trapped in fish netting
Video has emerged of kayakers coming to the rescue of a sea turtle off the coast of Gran Canaria.
In the video, various bits of polystyrene are seen floating in the water near to the turtle, which is trapped in fish netting.
The kayakers approach the reptile and free it from the net by using a small knife.
They then release the turtle back into the sea.
Watch the video at the top of the page to see the moment the turtle is saved from the fish netting.