Jonathan The Tortoise Photographed In 1902 And Today 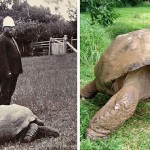 Feeling old today? You could be Jonathan the Tortoise, a big and friendly guy estimated to be around 182-years old. Jonathan was alive to see many monumental moments including, WWI and WWII, plus so much more. Of course, chances are he wasn’t paying any attention, he has bigger turtle concerns on his mind.

The above photo of Jonathan dates back to 1902, although his estimated birth date reaches as far back as 1832. This is decided upon by looking at the photo from 1902, in which Jonathan is a full grown tortoise, meaning he was at least 50 years old at the time the photo was taken. A little research indicates Jonathan was brought to the island of St Helena in 1882, where he still lives today.

Check out these photos of the world’s oldest known living land animal–Jonathan the Tortoise is downright adorable! Jonathan lives at the Plantation House with the governor of St Helena. He doesn’t reside at his awesome digs alone, he shares the property with a crew of 5 other tortoises. Without a doubt, Jonathan is the oldest of the pack.

Jonathan is still going strong, but he feels the effects of aging. His smell has started go, along with his eyesight. Surprisingly though, he hasn’t lost his libido and he is rather interested in the youngest female tortoise he lives with.

According to the the famous tortoise’s vet, Joe Hollins, this behavior is a good sign of more healthy years to come. As an active libido indicates health and a youthful spirit.

Dr. Hollins does notice age-related declines, such as Jonathan gets colder than the other tortoises, and he is thinner and harder to keep weight on because he doesn’t eat as much grass as he might should. The vet compensates for this by feeding Jonathan a special meal with higher calories once a week.

Dr. Hollins has conducted extensive research on Jonathan, and has found that at the very youngest, Jonathan the Tortoise is 160-years old, and at the oldest he is 180. The average life expectancy for a tortoise is only 150-years. This means, no matter what Jonathan has beat the odds.

As long as you come during daylight and don’t bother Jonathan while he sleeps, the general public is welcome to visit and photograph Jonathan from a distance, 2-metres to be exact. A main problem for the tortoise is keeping away from all of the tourists, each one clambering for a photo with the VERY old guy. Those responsible for Jonathan’s safety are constantly working up new ways to block off the enclosure and keep Jonathan safe.

Those responsible for Jonathan don’t set these rules to be mean, instead, they only want to help Jonathan live a good long life. You can never be too careful considering he has already exceeded maximum life expectancy, especially considering Jonathan might be the last of his breed. It is believed that Jonathan is the last remaining tortoise of his lineage, the others have gone extinct due to hunting. Dr. Hollins has done a lot of research about Jonathan’s breed, and even published a paper back in 2011 on the subject. While Jonathan is the oldest KNOWN living tortoise, he isn’t the oldest Tortoise ever recorded. One tortoise from India is said to have lived 250 years, meaning Mr. Jonathan could still have many more years of life to live.

Jonathan’s vet warns, “In truth he could die any day, but we obviously hope to extend his life as long as humanely possible. When the day comes, it will be an international news story.” Long live Jonathan the Tortoise!