“It’s a spaceship!” New Jersey UFO in viral videos turns out to be your basic Goodyear blimp 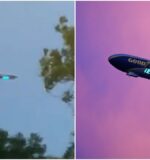 As it turns out, the “unidentified flying object” hovering over the Garden State was quite identifiable, and common – it was a simple Goodyear blimp.

Widely-shared videos that purportedly depict a “spaceship” or UFO flying through New Jersey skies on Monday seemed to confirm that 2020 is shaping up to be quite the apocalyptic year.

But as it turns out, the “unidentified flying object” hovering over the Garden State was quite identifiable, and common – it was a simple Goodyear blimp. Blame it on being cooped up for so long that our minds are playing tricks on us.

TikTok user @.babyyjennii shared the video on Monday, which claimed to be showing a flying saucer hovering near New Jersey’s Route 21. Several other people could be seen standing on the side of the highway to snap photos and capture video of the advertising dirigible making its flight.

However, Goodyear representatives confirmed that they had flown a blimp on Monday in New Jersey and neighboring New York City to film aerial footage of the NFL game pitting the New York Giants versus the Pittsburgh Steelers at MetLife Stadium in East Rutherford, New Jersey.

Yet the video did still manage to capture the imagination of UFO-curious social media users, along with other videos shared across social networking platforms such as Instagram, Facebook, and Twitter

“Yo! Deadass look, it’s a f*cking space ship,” one man says while sounding high. “What the f*ck? Look! Ya-what?”

“Eyewitness accounts say a body came out of the ufo,” @yahnnisse wrote, claiming that the strange sighting had occurred in Passaic, New Jersey.

An Instagram account posted similar video depicting cars pulled over to better watch the visitor from another galaxy.