It Was Supposed To Be A Child’s Playhouse, But This Retired Couple Had Other Plans… 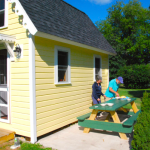 No matter what you do for a living, retirement is probably a much-anticipated chapter of your life. Many folks — myself included — dream of the day when they can finally kick back and enjoy their golden years.

But for some, when it’s officially time to hang up their boots, freedom can be a little scary… When you’ve spent so much of your life working, what do you do when your time is your own again?

Well, for one couple in Wapwallopen, PA, the decision was an easy one: Pack up, move out, and head to greener pastures. But this would be no ordinary move. No, Jason and his wife had some unique plans.

Like many people around the world, this retired couple would be settling into a tiny house, one built by hand. But this little house was unlike any other, because it was never intended to be a home…

After admiring their beautiful little home, be sure to watch the video at the end.
—————————————————————————————————-
Jason and his wife, both teachers, knew that when they retired, they wanted to move onto their family orchard. But when it came time to bid their colleagues farewell, they decided to do something a bit shocking. ————————————————————————————————-
Now, on their orchard in Northeast Pennsylvania, the couple is further distancing themselves from fast-paced living. They now enjoy smalltown pleasantries — like when a pick-up truck drove by their construction and called, “Nice job!” To see another Victorian-inspired tiny house, be sure to watch the video below! Please SHARE if you’d like to retire this way, too!