Invest in monitoring and tagging sharks to prevent attacks 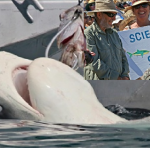 Use satellite technology as an early warning system when sharks swim close to populated beaches, rather than killing them It might not yet be a foregone conclusion, however, with the Environmental Protection Authority (EPA) stating in their latest report that there was “a high degree of scientific uncertainty” about its impact upon the great white shark population.

But the state premier Colin Barnett has suggested it will not be possible to place baited drumlines across the WA coast this summer.

It appears, under the pressure of opposition, that the way forward may be a more targeted approach and non-lethal methods.

The EPA report has emphasised the protected status of the great white shark. The initial drumline deployment at the start of the year rightly came under extensive fire and opposition from across the world following questions surrounding the great white’s population status and what was deemed unnecessary targeting.

It has taken far too long to realise that the breeding populations of all three shark species on the ‘hit list’ would be greatly impacted, severely disturbing the ecosystem of the oceans.

Sharks are essential top predators, ultimately helping to regulate and maintain the balance of marine ecosystems – reducing numbers can only have a detrimental impact on the ecosystem as a whole.

Very little is known about population of great whites and many myths exist about their reproductive behaviour.It is accepted that female sharks begin to a reproduce at about 4.5 metres in length, and males at 3.8 metres. Little, if anything, is known about shark litter sizes, making it very difficult to conserve this species.

It is well documented through the use of satellite tagging research in the Pacific Ocean that mature female sharks undergo a two-year migratory pattern between what is presumed a single mating site and separate nursery and pupping grounds. This is cause for alarm when related to unknown reproductive activity and targeted mitigation of larger sharks. A protester against shark culling in the Western Australian coastline holds up a banner at Cottesloe Beach, in Perth, Australia. Photograph: Matt Jelonek/Getty Images
With the recent fatal attack in Bryon Bay – which is not noted for its shark attacks – a shark suspected of the attack was spotted close to the incident area. This was estimated to be 2m long, which places it as a juvenile.

Historically, New South Wales has the highest spate of shark attacks in Australia and shark nets are set out along the coast from Wollongong to Newcastle from 1 September to 30 April each year. Byron Bay, however – a popular surfing location – falls north of the shark control measures.

This was the second fatal attack in the NSW this year, but no legitimate sighting of size and species of shark has been confirmed. The most probable cause of this shark attack was mistaken identity from a learning behavioural stance as the individual begins to move onto larger prey items (pinnipeds and cetaceans) with inquisition taking over, but sadly resulting in a human fatality.

The baited drumline criteria in WA targeting all sharks over 2m in length – incidentally the breeding individuals – seem superfluous to the ‘rogue’ shark in this instance.

Mistaken identity by the shark may have resulted in mistaken identity from a witness and an unnecessary targeted killing of the wrong shark, suspected of being the ‘rogue killer’. With no confirmed reports of the ‘killer’ shark, it once again results in speculation or wrongful killing of vulnerable shark species (bull, tiger and great white).

During the initial review of the baited drumlines in WA there was a positive note that provided a comprehensive suite of shark hazard mitigation strategies to be implemented for the future. These included the WA government to place commitments on more research into shark behaviour, shark deterrents and detection.

A perfect solution would be to increase the funding from the WA government for the monitoring and tagging of great white sharks and their movements – and use satellite-linked technology as an early warning system when sharks swim close to populated beaches.

With the suggested targeting of ‘rogue sharks’ there will no doubt be a tender process with private companies bidding for the permits, as was the way of the initial baited drumline programme.

Though non-lethal methods for preventing shark attacks in Australia are the most humane way, some people will still call for the unnecessary ‘targeted’ culls of rogue sharks akin to the movie Jaws.