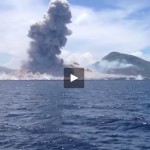 A video captured by an Australian couple shows the destructive power of a volcanic eruption. Mount Tarvurvur located in Papua New Guinea erupted on August 29.

The event sent plumes of debris and ash thousands of feet into the sky. The volcano continued to erupt for several days afterwards

The Australian couple, Linda and Philip McNamara, were on a boat nearby when it erupted again. The video also captures the sonic boom that rippled through the atmosphere. View the video below.

Eruptions have occurred at Mount Tavurvur every few years. In 1994, Tavurvur erupted at the same time as Mount Vulcan – another nearby volcano. They destroyed nearly two thirds of the city of Rabaul.