If You’re Looking For A Unique Property, You’ll Want To See This Listing That No One Wants To Buy. 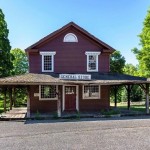 Devoid of human inhabitants, Johnsonville, Connecticut has the vibe of a literally ghost town. But hey, a few coats of paint and you could DIY your own town, right?
Well, here’s your chance: the entire 62 acre historic village is actually up for sale with a starting bid of $800,000. Johnsonville has been vacant for more than 20 years and, oddly enough, this is not the first that time has happened. It’s actually been abandoned 3 times. Back in the 1830s, Johnsonville was a thriving mill town along the Moodus River where a restaurant, general store and schoolhouse served its inhabitants and visitors from nearby towns stopping in for some riverside recreation. The colonial and Victorian homes were built by the families of the mill-owners. They lived in the until the 1950s when modernization crept in on the community and Johnsonville became a ghost town for the first time.