I Travelled 25000 Km In Siberia To Photograph Its Indigenous People, 6 Months Later Here’s The Result 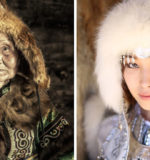 Hi! My name is Alexander Khimushin. Nine years ago I packed my backpack to see the world and have been globe-trotting ever since visited 84 countries. While travelling the world, I realized that people are the most amazing part of it.

Three years ago I came up with an idea of the photo project ‘The World In Faces’ that would celebrate beauty and diversity of the world through the portraits of ordinary people. Especially from those remote places, where culture and traditions are still alive. Since then I have taken thousands of portraits all over the world. Last six months I photographed indigenous people of Siberia.

An enormous region, almost a double size of Australia and 30% larger than the United States, Canada or the whole Europe. Siberia is one of the world’s last frontiers of the unknown. No doubt, everyone heard that it is very cold and sparsely populated, but what do we know about people living there?

During my half-a-year-long solo journey, I covered 25,000 km to visit many remote locations across Siberia: from lake Baikal shores to the coast of Japan sea, from endless steppes of Mongolia to the coldest place on Earth – Yakutia. All with only one mission – to capture faces and traditions of various groups of indigenous people living there. While some of the ethnic groups are dominant in their regions, many others are on the edge of disappearance, with a total population as low as only a hundred people left. They remain largely unknown to the outside world.