I Photograph Great White Sharks In (Hopefully) A Non-Scary Way 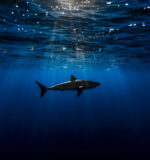 I’m George Probst, and I have been photographing great white sharks at Mexico’s Isla de Guadalupe since 2006. As a child, I was initially both fascinated and terrified by sharks from a very early age. I had always wanted to see a great white in the wild, which was something I had always just considered a “bucket list” item. When I headed to Guadalupe in 2006 armed with only a tiny point-and-shoot camera, I did not expect to ever return or see another great white, again. However, I got hooked after my first trip and have been at it ever since.

One thing that struck me on my first dive trip was that the sharks did not behave like I had seen them portrayed on movies and television shows (including some documentaries). While we were using protective cages to dive, the sharks didn’t seem particularly interested in the divers in an aggressive way. They were not actively “out to get” anybody and spent most of their time just swimming around calmly. They also didn’t have solid black eyes like Quint from ‘Jaws’ had led me to believe. In fact, when they come in close enough and the light is good, you can see that they have a blue iris, which allows you to tell where they are looking. They often will look eye to eye with you, which is certainly a unique feeling.

The more I photographed these animals, the more I noticed how a lot of photographs of the species tend to focus on them eating and looking particularly ferocious (which they certainly have the ability to be). I’ve taken a few of these kinds of open-jaw shots over the years, and they are admittedly popular among the masses, but I feel like they aren’t particularly representative of how I’ve typically seen the sharks behaving in my experiences with them. In fact, most of these kinds of shots actually involve dive boats using bait to get the sharks to open wide.

It’s worth pointing out that while great white sharks aren’t out to get people and aren’t always trying to eat anything in sight, they are still large, predatory, wild animals that certainly have the potential to be dangerous. As is the case with any wild animal, a high level caution and a healthy dose of respect should be used in their presence.

Over the last several years, I’ve set out to try capture great whites in a manner that covers the whole spectrum of their typical behavior, beyond just them eating. I’ve also tried to capture some of the “personalities” of the individual sharks that I’ve become familiar with year after year. Most of the sharks we encounter at the island have been named by researchers as part of an ongoing identification project. “Micks,” a male great white shark, is bathed in sunlight as he swims just below the surface. A great white shark (Carcharodon carcharias) at the surface with jaws open. This open-jaw behavior is not typically how we see great white sharks at Guadalupe. Yellowfin tuna (a naturally occurring prey item at the island) is used by some boats to attract the sharks. This shark was attempting to grab a bite of tuna just before this shot was taken.

Mackerel scad clear the way for “Monkey,” a male great white shark, as he swims near the surface off the coast of Isla de Guadalupe. Despite Quint’s claim that sharks have “lifeless eyes, black eyes, like a doll’s eye,” great white sharks actually have a blue iris. Out of all the photos that I’ve taken over the years, I feel like this shot of a great white shark gracefully and peacefully swimming through the water is one of the most accurate representations of the species, and how it would typically be viewed in the wild. This young great white shark is one of the smallest females that I’ve seen at Guadalupe. The pinnacle of the dorsal fin of a male great white shark just breaks through the water’s surface. “Tzitzimitl,” is a female great white shark named after an Aztec deity. Her name loosely translates to “air demon.” With powerful strokes of his tail, a male great white shark glides gracefully through the deep blue abyss below.

Smile for the camera “Legend,” a male great white shark, seemingly had quite big smile on his face as he was swimming by for this shot. One of my favorite ladies of Guadalupe, “Lucy,” an adult female great white shark, gracefully swimming by for a nice photo op.

Getting a bit nosey “Legend,” a curious male great white shark, made several close approaches to my camera on this particular dive.

Bent, but not broken “Lucy,” a female great white shark, is one of the most recognizable sharks who visits Isla de Guadalupe, due to her deformed caudal fin (tail). Lucy has adapted to the injury with a modified swimming method, and she has maintained a healthy weight over the years. “Cal Ripfin,” a male great white shark, comes in for an extreme close-up.

Who wants a hug?