How to Grow 100 Pounds of Potatoes in 4 Sq Feet 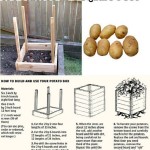 Quite the clever gardening tip here folks! Today’s feature includes tips from three different sources for growing potatoes vertically (in layers) instead of spread out in rows across your garden. If you have limited garden space or want to try some nifty gardening magic, this could be a great option for you.
Seattle TimesFirst, there’s this article from The Seattle Times: It’s Not Idaho, But You Still Can Grow Potatoes: First, there’s this article from The Seattle Times: It’s Not Idaho, But You Still Can Grow Potatoes:
The potatoes are planted inside the box, the first row of boards is installed and the dirt or mulch can now be added to cover the seed potatoes. As the plant grows, more boards and dirt will be added.
You plant in one bottom layer, boarding up the sides of each layer and adding dirt as you go higher (you wait until the plants have grown a bit before adding a new layer). While new potatoes are growing in the top layers, remove the boards from the first layer at the bottom to carefully dig out any that are ready for harvesting. Fill the dirt back in and board up the box again. You move up the layers and harvest as they are ready. I imagine the new potatoes in the first couple bottom layers would be somewhat awkward to get at but as you move higher–not so bad.
I traced the information provided in the article to Irish Eyes Garden Seeds, they also advise you can skip the box and try growing them in a barrel or wire cage instead.
In another article on The Seattle Times (found here), I came across a blog post from Sinfonian’s Square Foot Garden that details his attempt using this box method, he added this tip for a better yield (Update: link removed since page is no longer online) :
Greg from Irish-Eyes Garden City Seeds let me know that Yukon Golds, and all early varieties set fruit once and do not do well in towers. You only get potatoes in the bottom 6 inches, which is what I got. Late season alternatives to yukon gold are Yellow Fin and Binjte.
Bonus! For a handy project sheet, The Seattle Times has a nice image file detailing the steps (click to view the original): Imagine growing all those potatoes in a just a few square feet–and how drastically reduced the weeding job will be! So Clever.
Reader Update: Here’s some info sent in by Christine who made a bin using wood pallets:
Last weekend, I was inspired by the Tip Nut potato bin – grow 100 lbs in 4 square feet. As nice as it looked, it seemed to be very complicated, especially unscrewing slats. Being a “just do it” kind of person, I asked my husband to build me one using pallets — which are free. He picked some up, but I realized that they were enormous, so he cut them in half and made side by side compost / potato growing bins.
The Tip Nut plan called for unscrewing the bottom portions to get the grown potatoes out. Rod attached pieces of wood to hold the front pallet in place and to allow you to slide it up like a window. I took books of hay to stuff in the openings of the potato bin so the dirt wouldn’t fall out. We’ll see how it does.
Here’s a photo: Unfortunately we placed it up against our neighbor’s fence. On the other side is their dog, who our Puggle Feeney loves to visit. He is always trying to dig under the fence. With the bins in place over his digging spot, the poor guy jumped into the compost bin and got stuck!
Christine’s Update: After having it in place for a couple of weeks, I discovered that the local cats think it makes a fine litter box, so I’ve added a frame on the top with chicken wire to keep them out, but allow the sunlight and water in. See her page here for lots more info and tips: Food Security 2009. Update: Reed Screening Towers
(Spring 2011)
Sunset.com: Here’s another project using different materials but grown with the same basic idea. These are made with reed screening wrapped around tomato cages (to give them shape) and then secured to the ground with rebar stakes.
To get started, a single layer of seed potatoes are planted, a few inches of compost and rice straw is added and then as the vines grow taller, they are topped off with more rice straw for the tubers to grow in (no more soil is added).
At the end of the season, remove the bamboo screening and watch the potatoes tumble out!