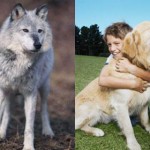 
How long have we known our best friend?

Researchers know that humans began domesticating dogs before agriculture began (~10,000 years ago), but just when and where did the wolf become the dog? Previous research points to the Middle East or East Asia as the focal point of dog domestication and the origin of some of the oldest breeds of dog. The oldest dog fossils are about 36,000 years old.

Now, a recently discovered fossil in Siberia is raising more questions. DNA was extracted from the tooth of the fossil and analyzed, revealing that the tooth is about 33,000 years old, belongs to a canid, and that the canid is most closely related to modern dogs and prehistoric canids of the Americas. It seems our furry companions still have a few secrets of their own.i

The Beginning of a Beautiful Friendship: Canine Domestication
How a wolf could transform from suspicious, wild beast to obedient, cuddly Fido may seem mystifying or even unbelievable. But scientists have used DNA evidence to show that, more than likely, the dog did indeed descend from the gray wolf.
Although the oldest fossils of a domesticated dog are from a 14,000-year-old dog grave, DNA evidence suggests dogs diverged from wolves much earlier than that (with estimates ranging from 15,000 to more than 100,000 years ago) [source: Wade]. Regardless, historians agree that humans domesticated dogs before any other animal — making dog man’s oldest friend, if not his best.
Scientists can only guess how dogs and humans first became friendly. A popular theory suggests that humans began taking in wolf pups and eventually were able to tame them. Another theory proposes that the tamest wolves were not afraid to rummage through human trash sites to find food. Because they fed this way, these tamer wolves were more likely to survive and evolved into dogs through natural selection [source: NOVA].
Because wolves operate in packs, humans easily took the place of the “highest ranking wolf.” So the animals quickly learned obedience. As tamer wolves were more likely to stick around humans, evolution naturally (or humans intentionally) bred tamer and tamer wolves, until eventually, we got the dog. Sometime during this process, man and tamed wolf realized they made for a dynamic duo on the hunting scene. A combination of human ingenuity and wolf speed and ferocity, this pair shared the rewards of their captured game in a mutually beneficial relationship.
However, this evolution of wolf to dog still begs the question: Why do dogs look and act so much different from wolves? A 20th century Russian Geneticist, Dmitri Belyaev, was able to solve part of the mystery surrounding how a wolf made such a drastic transformation. In his attempts to breed tame foxes, Belyaev found that after several generations of selective breeding, foxes not only became tamer (which he expected) but also began to take on dog-like characteristics.
Though DNA evidence tells us that wolves, not foxes, are the forefathers of dogs, this experiment uncovered surprising revelations about how behavior and appearance could have changed wolves into dogs [source: NOVA]. As the foxes became tamer, so also did they develop floppy ears, short snouts, spotted coats, highly-set tails and even a tendency to bark. Amazingly, many of these characteristics are absent in wild foxes, much as they are in wolves, so neither artificial nor natural selection could intentionally draw them out. Instead, genes that account for tameness must also carry a code for such things as floppy ears.
Belyaev’s findings also help us understand how different dog breeds ended up looking so different from each other when wolves look relatively uniform. Tameness brought about variation unseen in wild wolves, and humans embraced this variation. Smaller cuddly dogs are better at keeping your lap warm, while bigger, faster dogs are better at hunting. Instead of choosing one or the other, humans bred different dogs for different purposes. In the 19th century we saw a surge in the number of dog breeds along with the advent of dog shows.
Now that we have learned about the domestication of dogs, we’ll find out how cats clawed their way into our hearts and homes.