Her Husband Of 16 Years Tells Her To Turn Around. When She Does, You’ll Be In Tears. 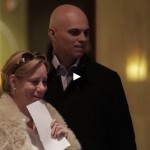 Tommy and Janet have been married for 16 years, and they’re even more in love today. In order to show he’s still committed after all these years, Tommy decided to surprise his wife in a BIG way and do something extra special to celebrate the occasion.

As the couple entered the Westin hotel in Seattle, a man started dancing in front of them, much to Janet’s surprise. Suddenly, a large flash mob began dancing to Bruno Mars’ “Marry You”. Finally, after the dancing was over, Tommy got down on one knee and re-proposed to his wife. And she, of course, said yes!

This is such a beautiful and sweet moment. It’s so wonderful. Congrats, Tommy and Janet!