Her 3-Year-Old Begs A Stranger To Hold Her, But Mom Is Stunned By What Comes Next… 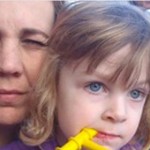 In 2014, a Canadian mom named Shanell boarded a plane from Florida to Philadelphia. She dreaded the next two-and-a-half hours; her three-year-old daughter, Kate, has autism. Plane rides can be traumatic and anxiety-filled.

Shanell hoped for a kind and patient person to sit next to them, as she watched with bated breath while passengers boarded. That’s when a businessman named Eric walked up the aisle and stopped at their row. Shanell never expected what came next.

Kate began referring to Eric, a man whom she’d never met, as “Daddy.” She was fascinated with him, and kept reaching for him. But instead of smiling politely and ignoring the little girl, Eric put away his paperwork and talked to and entertained her for the entire flight.

“You walked up and sat down with your briefcase and your important documents and I had a vision of Kate pouring her water all over your multi-million-dollar contracts, or house deeds, or whatever it was you held. You could have shifted uncomfortably in your seat. You could have ignored her. You could have given me that ‘smile’ that I despise because it means; ‘manage your child please.’ You did none of that. You engaged Kate in conversation and you asked her questions about her turtles. She could never really answer your questions but she was so enamored by you that she keep eye contact and joint attention on the items you were asking her about.”

Her blog post quickly went viral. Eric couldn’t believe his simple act of kindness garnered so much attention. He didn’t think it was that big of a deal, but as Shanell says, “Sometimes the simplest things are such a big deal. But it’s a big deal for him to treat her like a little person.”