He Visited All 201 Countries In The World… WITHOUT Using A Plane! 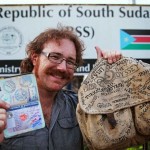 While you may not have heard of heard of him yet, Graham Hughes is a name you’ll want to remember.
This adventurer and expert traveler has accomplished an absolutely astounding feat that is (literally) going down in the record books – he’s successfully travelled to every country in the world, and, if that’s not impressive enough, he did it all without a plane.

Yes, you read that right – he visited every single country in the world without a single plane ride.

By now you’re probably wondering who this crazy Graham Hughes guy is, and what would drive him to explore the entire earth without an easier means of transportation. Well, aside from achieving that extraordinary traveling feat, he’s really just an ordinary guy like you or me.

A man now in his mid-thirties from Liverpool, England, he was driven to embark on his adventure by a love of travel. That, and some serious determination, is how he accomplished his goal.

While he may have dreamed of visiting every country on earth since a child, the whole idea really hit him when he was backpacking around East Asia some years ago. After making stops in off-the-beaten-track destinations like Burma and Brunei, he realized that, with his British passport, he could visit other remote areas as well – essentially anywhere in the entire world.

So, he decide to commit to an epic new adventure and got to it, planning for about six months and contacting Guinness World Records about rules and guidelines for setting a brand new record.
He had already visited 70 countries prior to his big expedition, which is impressive in itself, and decided to visit 131 more locations for an amazing total of 201 countries (as determined by Guinness World Records). This number included all 193 members of the United Nations, as well as Taiwan, Vatican City, Palestine, Kosovo, Western, Sahara, and the 4 home nations of the United Kingdom.

He was also told by the record setting organization that, in addition to not being able to take a plane, he wouldn’t be able to drive anywhere himself or take a private vehicle over long distances. This rule made for plenty of bus rides, hopping aboard cargo boats, and a ton of walking (160000 miles total).

While such terms may have sent other devoted travelers running, Hughes decided to take the challenge. He had plenty of great reasons to do so, saying that he wanted to fulfill his childhood dream, set a new Guinness World Record, help raise money and attention for WaterAid, and prove to others that his goal was, in fact, possible.

And possible it surely was as, not only does he have photos of himself in every country he visited, but Guinness World Records has officially given him the record title of “most countries visited in one year by unscheduled ground transportation”.

While this journey may be over, Hughes maintains that he’ll continue to “keep in the spirit of adventure”. Plus, he’s got more than enough memories to last him a lifetime, like being jailed for a week in Congo for being a “spy”, having a Filipino transsexual save him from Muslim fundamentalists, and spending 4 days in a fisherman’s wooden canoe while in the open ocean with no means of communication while traveling to Cape Verde

It’s truly inspiring to other travelers to see what Hughes has accomplished. He’s really just like any other ordinary person – he didn’t have an excessive amount of money or special connections. He left armed with his passion for travel, trust of people, fluency in one language, a shoe string budget of $100 a week, and a wish to “show that the world is not some, big, scary place”.