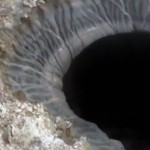 Isn’t Siberia too cold to be the location of Hellmouth? That’s the question some people were asking as reports came in of the discovery of a mysterious hole in the northern Siberian area of Yamal, a word that means “End of the World” in the language of its indigenous people, the Nenets.
According to the Siberian Times, the hole was discovered by a helicopter crew working for an oil company in region, which contains major gas fields. From the copter, engineer Konstantin Nikolaev filmed the hole and estimated it to be 80 meters across.

The video shows scorched edges around the hole and the crater appears to be bottomless. That led to speculation that the hole may have been created by a meteor, since Siberia is frequently hit by them, or a UFO, since that’s more interesting to speculate even though no recent flashes or streaks in the sky were reported. Some suggested it was caused by a stray missile or a secret weapon test but no one in Russia is going to confirm that.
Climate change proponents will like these explanations. Anna Kurchatova of the Sub-Arctic Scientific Research Centre says global warming melted underground ice which released trapped gas and the crater was formed by a water, salt and gas mixture igniting an underground explosion. Polar scientist Dr. Chris Fogwill says it’s a geological phenomenon called a pingo, which is a giant block of underground ice that melted and formed a sinkhole.
A team of experts from Russia’s Centre for the Study of the Arctic, the Cryosphere Institute of the Academy of Sciences and Russia’s Emergencies Ministry are headed to the area to investigate.
I like the Hellmouth conjecture because that means hell is about to freeze over and my favorite team will finally win a championship.