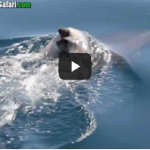 Whale watchers aboard Captain Dave’s Dolphin and Whale Watching Safari (http://www.dolphinsafari.com) had an unexpected and heartbreaking encounter with a pod of bottlenose dolphins yesterday. A deceased dolphin calf was being carried by an adult bottlenose dolphin on its back.

“I believe this calf has been dead for many days, possibly weeks,” explains Capt. Dave Anderson, “you can see the flesh is decaying. In my nearly twenty years on the water whale watching I have never seen this behavior. Nor have I ever seen anything quite as moving as this mother who refuses to let go of her poor calf.”

This video sends a powerful message about how much a dolphin can care. It is a window into a dolphins heart. This animal is laboring under the strain of carrying this dead animal on its back day and night is probably keeping it near the surface so the departed dolphin can breathe. We can assume this because dolphins do not normally swim with their dorsal fins sticking out of the water continuously like this bottlenose did. We can only imagine what happened; over half of all bottlenose calves die from disease and predators before their second birthday, and since we know that the family unit in dolphin pods is the mother and calf, this is almost certainly a mother and calf pair. Did mom start off helping her weak, sick offspring swim to the surface to breathe for days till the tiny dolphin died? When will she give up on her calf? Will she continue carrying her deceased on her back until the carcass begins to disintegrate? This poor grieving mother dolphin takes us, without words, to a place where as one of our passengers said in the video “humans and dolphins are not so different.”

The pair were surrounded by other dolphins, almost as if they were being protected, during this profoundly sad time. The dolphin was seen an hour later by another boat still carrying the calf.

All audio and video footage is copyright David Anderson/DolphinSafari.com and may not be used without permission.