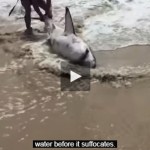 A GREAT white shark desperately fights for its life – after being caught by a fisherman’s hook.The dramatic footage was shot by Lars Liedberg, 38, who had just finished having breakfast in a restaurant, in Plettenberg Bay South Africa, when he saw a struggle on the beach below. However, multimedia designer Liedberg, who is originally from Zimbabwe, said that the man seemed more concerned with retrieving his hook than saving the shark. Liedberg said that following a prolonged effort to get the fish back in the water, the distraught shark was eventually helped into the ocean and was able to swim away.