Girl of 13 kills herself after mother’s Facebook ban: Indian teenager so upset at mother’s order to close account she committed suicide 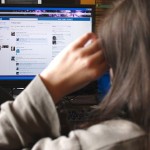 A teenage girl hanged herself because her mother demanded that she remove herself from Facebook.
Aditi Gupta, 13, was so upset by her mother Mohana berating her for spending too much time chatting with her friends, she committed suicide in her bedroom.
Mrs Gupta, 36, told her daughter before leaving for work: ‘I want that Facebook account closed by the time I come home.’ She returned for lunch four hours later to find her dead. Hanged: Aditi Gupta, 13, killed herself over a Facebook ban (photograph posed by model)
She told police she couldn’t believe her daughter would end her life over ‘something so trivial’.
She said: ;I generally leave for work around 9.30am. But my husband left early and my older son was at his grandmother’s house for the holidays.

‘When I was about to leave, my daughter was sitting in front of the computer. I was angry because she was spending a lot of time on social networking.
‘I told her she was too young to be on Facebook and was wasting her time’.
The case has triggered a debate in India about Facebook, parental responsibility and the ‘loss’ of children to cyberspace contacts.