Giant rabbit Darius is an Easter bunny with a monster appetite 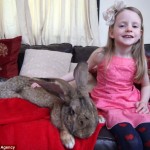 Looking for the Easter bunny? Here’s one that’s easy to spot.
Darius weighs three-and-a-half stone and measures 4ft 4in, making him the world’s biggest rabbit, according to Guinness World Records.
His owner, Annette Edwards, 62, from Worcester, is considering putting him on a diet after revealing that he eats 12 carrots a day – more than 4,000 a year.
He also gets through piles of cabbage, apples and two large bowls of rabbit mix – at an annual cost of £2,400. Darius weighs over three-and-a-half stone and measures 4ft 4in – making him the world’s largest
Ms Edwards is well used to looking after bunnies with big appetites as Darius’s mother Alice held the record title before him.
And Ms Edwards couldn’t believe the speed Darius grew at when he was born – and she never thought after just five years he would hold the crown for biggest rabbit in the world.
‘Darius is from a family of giant rabbits but he is the biggest bunny in history. It’s amazing just how big he is.
‘If Darius had his way he would never stop eating,’ she said. ‘He is very greedy. I have to really watch him.
‘He has a great personality and so I can’t be too angry when he is trying to sneak more food… As the bunny’s birthday is in April, the family say he really is the real-life Easter Bunny
‘Darius eats me out of house and home but he is very active which is good for his health.’
‘Luckily he likes to hop around all the time. I had to put a child gate on the stairs to stop him going up there.
‘I treat him like a dog. He even sits on the sofa with me to watch TV.
‘People love coming round to see Darius – he is bigger than most dogs.
‘The family all love him and he has a mischievous glint in his eye.’
‘He really is the real-life Easter bunny, as his birthday is in April and it always falls around Easter.
‘There is no secret to growing the world’s biggest rabbit. I treat him really well and indulge him in the odd carrot or 12.’
Continental giant rabbits usually live to four or five years, but can last up to seven if well cared for.
They are considered docile, friendly and intelligent, and are relaxed around humans if socialised when young. They were originally bred for their meat and fur.