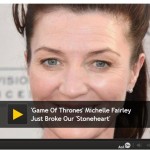 Spoiler Alert: This post contains spoilers for George R.R. Martin’s “A Song of Ice and Fire” series. Don’t read if you have not read “A Storm of Swords.”

All men must die, but not all of them have to stay dead.

Season 4 of “Game of Thrones” wrapped up almost two weeks ago and fans of George R.R. Martin’s book series are still upset a certain character was left out of the final episode. Lady Catelyn Stark, the matriarch of the Stark family, made a fatal mistake in attending a wedding in Westeros in Season 3. We all know how those happy affairs tend to end when they take place in the Seven Kingdoms, and after she watched her son fall at the hands of Lord Bolton, Catelyn Stark had her own throat slit by one of his men.

The episode was the most shocking of the show and fans still haven’t gotten over the loss of two of our favorite Starks, so naturally, when talk of Fairley reprising her role during the finale of Season 4 took hold, we got more than little excited. (For anyone who hasn’t read the books, after Catelyn Stark is killed she’s resurrected and becomes the zombified harbinger of vengeance known as Lady Stoneheart.)

Unfortunately for Fairley, and for the fans, it looks like Catelyn Stark is staying where she is: six feet under. Fairley spoke with Entertainment Weekly about the omission of her character in the finale of Season 4 and all but confirmed she won’t be returning to the fantasy series.

“Yeah, the character’s dead. She’s dead,” Fairley said. The actress went on to defend the option to leave out her character’s arc in Season 4.

“You respect the writers’ decision,” Fairley said. “They can’t stick to the books 100 percent. They have got to keep it dramatic and exciting, and extraneous stuff along the way gets lost in order to maintain the quality of brilliant show.” Which basically means we can say goodbye to any hope of seeing Lady Stoneheart during Season 5.