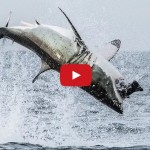 A MAGNIFICENT great white shark leaps from the water to take a chunk out of a would-be seal.These amazing full breaches were conceived using a foam rubber seal decoy – which is dragged behind a shark cage diving boat, as a way of enticing the hungry predator. Shot by filmmakers Mark van Coller and Morne Hardenberg in Cape Town, between June and August of 2013 and 2014, the footage demonstrates the frightening power and agility of the iconic animal. But achieving such incredible shots is only possible if the conditions are right.