First “Super Moon” Of The Year Will Be Visible July 12 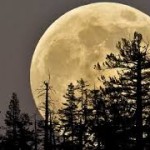 doesn’t have a perfectly circular orbit around the Sun, our moon follows an elliptical orbit as well. The point in the orbit when the moon is closest to Earth is called perigee. When the moon is full in this location, it is referred to as a perigee moon. Because of its proximity, it appears slightly larger and brighter and has earned the nickname of “super moon.” There are five of these this year, including three this summer on July 12, August 10, and September 9.
Super moons can appear to be about 30% brighter and up to 14% larger than the average full moon. While this might sound like a pretty massive difference, it is fairly difficult to notice and appreciate these differences. A fair amount of buzz about how amazing the full moon looks this weekend is due to the fact that not many people take time to look up at the moon very often.
While there is a full moon about once every month (every 29.53 days to be exact), not all of them get widely publicized without some connection to another event such as being at perigee or a lunar eclipse, much to the chagrin of astronomers. While there isn’t anything mind-blowingly special about a perigee moon in and of itself, the one this weekend will be hanging a bit lower in the sky, adding to the illusion that the moon will be looking much larger and is definitely worth checking out.