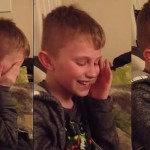 IN A YouTube video uploaded before Christmas a young boy named Ethan is given a card by his mother addressed ‘to a wonderful brother’.
The confused 10-year-old opens the card that has a picture of his mother’s sonogram in it. This is when he realises what is going on and begins to cry with happiness.
According to the video description Ethan had been asking for a sibling since he was two years old.
“This year we were able to give him it. The moment the penny drops is priceless. The look on his face has made my year. What an awesome brother he is going to be!!” his parents wrote.
As he bursts into tears after he finds out he is going to be a big brother he whispers how happy he is and begins to giggle.
The heartwarming clip is nearing a million hits already and bringing grown men to the brink of tears.
“I’m a 22 year old man and I’m almost in tears!!” wrote one YouTube watcher.