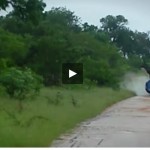 THIS is the moment a rampaging elephant flipped a car carrying two tourists. The massive bull first crushed the front of the hatchback before flipping it over with astonishing ease and trampling it again. The terrifying attack was captured in South Africa’s Kruger National Park two weeks ago – but has only just been released. A female passenger had to be rushed to hospital with a gore wound to her upper thigh but has since been discharged. According to a spokesman for the Kruger National Park, the male elephant was in a state of heightened sexual tension known as musth – making it extremely aggressive. It has since been shot and killed to prevent further attacks.