During A Night Dive, A Dolphin Swims Up To A Diver. What He “Says?” I’m Speechless. 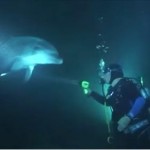 Keller Laros calls himself the “Manta Man,” and he’s widely considered one of the foremost experts on the manta rays of Hawaii. Beyond that, he’s developed quite a following for his incredibly underwater videos.

While observing the beautiful manta rays of the Pacific Ocean, Keller has obviously caught footage of many other fascinating creatures, including one of my favorite animals: the bottlenose dolphin.

Bottlenose dolphins are among the smartest creatures on the planet. They have displayed understanding of memory, numerical values, patterns, discrimination between species, and they are even able to understand human gestures. For example, if you point at a ball, your dog won’t know to follow where you’re pointing. He’ll just see an outstretched hand. A dolphin, on the other hand, can interpret what you’re trying to communicate.

This thrilling video below shows just how well a dolphin in distress and Keller were able to communicate with one another when the dolphin got caught on a fishing line. The dolphin approaches Keller a few minutes in, and they are able to work together. It’s amazing how two different species can communicate.