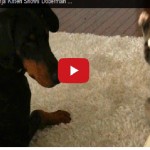 A CURIOUS kitten launches an adorable attack on a bemused dog in a heart-melting bid for attention. Frisky feline Sophie paws at the dog’s snout and quickly runs off before launching another attack. Customs officer Jessica Manning recorded the footage of her two pets Bishop, a three-year-old doberman, and two-month-old kitten Sophie in her home. Sophie was found abandoned in a gas station restroom in British Columbia, Canada where Jessica, 3
0 and her boyfriend Ryan Onsowich, 31, live.