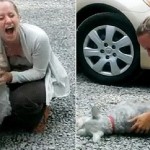 You have never heard a scream like this, Casey the Schnauzer let out a true scream of joy when her long-lost sibling came home. Rebecca Svetina and her family dog Casey have been pals for about 9 years, although their relationship has often been long distance. When Rebecca was studying to be a communication major at Kent State University, Casey was only a puppy. In between college breaks, Rebecca would return to her parent’s house is Murrysville, where her dog was always there to greet her.

As any college student knows, there were a lot of hellos and goodbyes as Rebecca went back and forth to college and then home. But never had Rebecca been gone for so long until she decided to embark on a trip to Slovenia in 2008. On July 23, two years later, Rebecca finally returned home. At which point Casey could not have been happier to see her.

Her family was excited to see her, no doubt, but it’s her little doggy that stole the show. Just want until you see the video for yourself!

According to her family, Casey is “very loyal and loving to family and friends.” She is known for getting very excited when she greets people, regardless if they have been gone for one week or a few hours. Yet no one had ever seen Casey get so excited until the day Rebecca returned home.

After graduating, Rebecca decided to head off to Slovenia in 2008, causing her and Casey to be apart far more often.

Rebecca’s new husband, Miha Svetina, shot the video of the reunion with the purpose of sharing it with their friends and family back in Europe. To their surprise, FAR more people, in fact millions, have clicked to watch the heartwarming video of a dog and his human.

The video has since taken YouTube by storm, earning millions of views and causing their phone to ring off the hook from curious reporters and people all over the world. While the video is amazing, it did cause the family some concerns at first. They said in a phone interview, “We were actually worried. Was she having a heart attack or a stroke or a seizure?” Once Casey couldn’t scream anymore, she decided to collapse on the ground, a pile of happiness, at last her friend was home! At which point you can even hear Rebecca’s husband in the background asking, “Is she okay by the way?”

Just to take make sure their sweet Schnauzer was in fact okay, they took Casey to the vet after the incident. Turns out, Casey appears to be just fine but she has been under close watch–just in case all of that love and excitement proved too much.

The couple was married in Slovenia a year ago, with 20 of their closest American friends and family in attendance. On July 26 they came to Rebecca’s hometown of Murrysville in order to have a reception at the Ehalt family home with 80 close guests. After their wedding and reception, the couple had plans to take it easy, see some of the awesome sights around Pittsburg for the week. Including the Frank Lloyd Wright’s architectural masterpiece in Fayette County, and the Senator John Heinz History Center. None of these plans came to fruition, instead the couple had to decide which media groups they would give interviews to, considering EVERYONE wanted one.

CNN, Good Morning America, and a few local news stations were among the lucky to score an interview with Rebecca and her overjoyed dog. Rebecca chose to go to Slovenia because her grandparents migrated from there back in 1908. For one year of her stay, a scholarship paid for her to be there and learn the language. The trip ended up being a once in a lifetime opportunity Rebecca is so happy to have had. She says, “It’s a beautiful country with just 2 million residents. You can swim in the sea and hike in the mountains all in the same day.”

Not only did she have an amazing time there, but she met her husband Miha Svetina during her 11th month in the country, at which point she stopped coming home as frequently. Eventually causing 2 years to go by without Casey and Rebecca seeing one another.

Rebecca is a graphic designer and she is also an English teacher. Unfortunately for sweet little Casey, Rebecca now calls Slovenia home, although she’s coming back to the states August 10th–get ready for some excitement Casey!