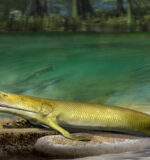 Specimens show that humans likely evolved from this fish

Fossils bridge the gap between fish and tetrapods

Fossils of vertebrates are hotly debated