Dad Humiliates Son By Forcing Him To Make THIS Public Confession…SHOCKING! 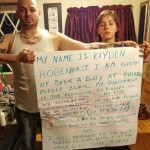 One Wisconsin father decided to punish his son, and the punishment is now going viral with thousands of views — drawing both praise and criticism.

After he discovered his son Kayden was bullying children at school, Timothy Robenhorst forced Kayden to undergo a controversial five-part punishment to ensure he never bullied anyone again.

Timothy woke his son up at 4:30 a.m. and made him to 50 push-ups on his fists.
Kayden had to run a mile in the freezing cold, along with landscaping work.
Kayden was forced to apologize to the victim of his bullying in front of his entire class.
He then posed for a photo alongside his father that featured a sign which publicly revealed what he did and why he was being punished. Timothy posted it on Facebook and encouraged people to share it.
Kayden had to set the photo as his profile and cover picture on Facebook.
We’ve seen the repercussions of bullying before — like with the social action campaign, the BULLY Project. That’s why many people think Timothy taught Kayden a powerful lesson that will stick. Others said that it required more to tackle bullying than to simply say sorry.

Reports say that Kayden thanked his father, saying, “I learned my lesson and he’s a good dad for doing it.”