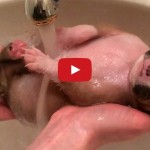 This adorable puppy may be the most chilled canine on the planet as he blissfully settles into bath time. The two-week-old was close to death when he was found abandoned in a dumpster with his two sisters– but now it looks like his troubles are a million miles away. They were found by Dallas Animal Service and referred to the DFW Rescue Me animal shelter where volunteer Claire Fowler was tasked with looking after them.