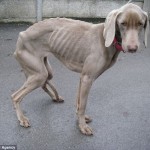 These stark pictures clearly show the ravages of poor Lola’s body after her own owners starved her for six weeks.
The animal’s spine, ribs and leg bones are clearly visible after Jennifer Plater and Michael Knight’s shocking display of ill treatment of the weimaraner breed.
Plater, 39, and her 40-year-old partner failed to turn up at court to face joint charges of causing unnecessary suffering to their dog, but were found guilty in their absence. Lola, a weimaraner breed, was brought in by authorities after being starved for six weeks by her owners Jennifer Plater and Michael Knight – who have been convicted of animal cruelty The animal’s spine, ribs and leg bones are clearly visible, and she weighed just 15.5kg when she was brought in

Vet Angus McKenzie, who examined Lola on behalf of the RSPCA, rated her on an 0 – 5 body weight index emaciation scale at just 0.5
Magistrates have now issued an arrest warrant for the pair, warning that they could face up to four months in jail for the offences.
Tony Stock, prosecuting, said that the alarm had been raised after neighbours called in the RSPCA to investigate after becoming concerned about Lola’s severe weight loss.
He said: ‘They said that they could see every bone in her body, she was so thin.’

RSPCA Inspector Vicky McDonald was called to the house and seized the dog after finding that Lola was ‘very emaciated’ with her skeletal features visible.
Speaking at Wigan and Leigh Magistrates Court, Mr Stock added: ‘When she lifted Lola into the Society’s vehicle she was taken aback by how light Lola was and how easy it was to lift her.’
Vet Angus McKenzie, who examined Lola on behalf of the charity, rated her on an 0 – 5 body weight index emaciation scale at just 0.5.
He found the dog to be dehydrated and suffering as a result of being starved for ‘at least six weeks or longer’. Lola’s weight has increased her weight to 21.4kg from 15.5kg – a gain of 47.6 per cent – within six weeks of being taken into care
Lola was taken into the care of the RSPCA on December 14 weighing 15.5 kg.
But by January 29, pointed out Mr Stock, she had increased her weight through normal feeding to 21.4 kg or a 47.6 per cent weight gain.
The couple, from Wigan, Greater Manchester, face joint charges of causing unnecessary suffering to the pet by failing to investigate her weight loss and poor condition.
They were also accused of failing in a duty of care to ensure they met the dog’s needs for fresh drinking water.
The dog has now been happily re-homed by the RSPCA.