Couple Quits Their Jobs To Build This Glass House For $500. 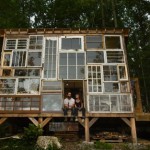 In the forests of West Virginia sits a magical home built by a young, adventurous pair of artists. Photographer Nick Olson, 27, and designer Lilah Horwitz, 23, were supposed to work their summer jobs — but after they met and fell in love, they realized they had something else in mind: they would spend the summer building a cabin in the woods for themselves, by themselves.

The windows were mostly found or scavenged. The glass was collected. The roofing was taken from an old barn. They lived on rice and beans and spent $500 in total on the home, and after five months the cabin was complete (sans plumbing or electricity, but beautiful still). The couple doesn’t reside there year-round, but rather they use their cabin as a creative escape — and I’m totally jealous.

What once was barren forest and stacks of old wood is now a magical glass-faced getaway. Horwitz describes her favorite time of day inside the home as the “nighttime sun” – just as dusk falls.