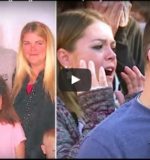 Audrey, a single mother of three, had to go to the hospital to get some tests done. She asked her neighbor Tisha — a mother of five and a Las Vegas bingo cashier — if her three kids could spend the night at her house.

Tisha and her husband agreed to take the kids for the night, even though their home was cramped enough as it was.

Audrey’s test results came back. She was diagnosed with stage two esophageal and stomach cancer.

Knowing her time was running out, Audrey was desperate to make sure her kids would be taken care of. Though they weren’t even close friends, she took a chance and asked Tisha to be the legal guardian of her children.

Again, and incredibly, Tisha and Kevin agreed. The parents of five opened their hearts and home to raise Audrey’s kids… and help them cope with their mother’s imminent passing.

It wasn’t long after that Audrey passed away.

Watch the video below to see the jaw-dropping surprise for Tisha and her newly assembled family of 10, courtesy of the amazing FOX5 Surprise Squad.