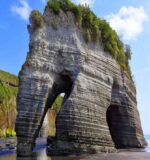 Once upon a time in a kingdom not at all far away a unique elephant enchanted visitors from around the world.

Dipping its feet into the water of a black-sand beach near Tongaporutu in North Taranaki, Elephant Rock was one of the most iconic rock formations along a coastline renowned for its dramatic scenery.

Solid rock from trunk to tail, the elephant seemed capable of withstanding all the wild west coast could throw at it.

But in early December last year, it was suddenly truncated, losing its head and trunk to the elements.

Do you have fond memories of a Kiwi holiday spot from your childhood that no longer exists? Email us at travel@stuff.co.nz.

It wasn’t the first Taranaki rock star to do a disappearing act. One of the nearby Three Sisters vanished in a storm in 2003 only for another sibling to climb out of the cliff face in 2013.

And this March, the “Twin Arches”, part of a cave structure, lost their battle with erosion and collapsed.

New Plymouth photographer Pat Greenfield, who has photographed the area since 2000, said it is one of the fastest eroding coastlines in the world outside of the polar regions.

“In a way it’s sort of heartbreaking because it feels as if it’s losing a lot of its character,” she said.

Visiting shortly after the elephant’s demise, Greenfield said the change in a year had been “dramatic”.

Noticing that a rock she had thought of as a “cousin” to the Three Sisters’ had detached itself from the cliffs, she dubbed it “Archway Rock” and a new Taranaki rock star was born.

She said those who lived near the coast had known Elephant Rock was going to lose its head eventually, as it had started to thin at the top.

But she believed the impact of the magnitude 7.8 earthquake which struck Kaikoura in November 2016, and was also felt in Taranaki, sped up the process.

Jan Green, who operates an Airbnb in Ahititi, 6km south of Tongaporutu, said visitors from all over the world had come specifically to see Elephant Rock and the Three Sisters.

She hoped the erosion wouldn’t dissuade people from visiting the area, but said she would have to wait-and-see.

Some, however, seem resigned to the fact that nature both giveth and taketh away.

Greenfield said Archway Rock is just as photogenic as the now-truncated Elephant Rock and that people would always be drawn to the beauty of the Tongaporutu coastline, irrespective of how it changes.

Karen Petersen, wife of Clifton Community Board deputy chair Warren Petersen, however, lamented the loss of the one-of-a-kind elephant.

“Elephant Rock was pretty special – it was to the locals anyway,” she said.