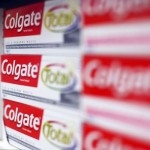 A chemical found in one of North America’s most popular toothpastes, Colgate Total, has been linked to cancer and other harmful health ailments.

It’s called triclosan, it’s also used in antiperspirants/deodorants, cleansers, and hand sanitizers as a preservative and an anti-bacterial agent. In addition to cosmetics and Colgate toothpaste, triclosan is used as an antibacterial agent in laundry detergent, facial tissues, and antiseptics for wounds, as well as a preservative to resist bacteria, fungus, mildew and odors in other household products that are sometimes advertized as “anti-bacterial.” These products include garbage bags, toys, linens, mattresses, toilet fixtures, clothing, furniture fabric, and more.

A recent study published in the journal Chemical Research in Toxicology found that the chemical encourages cancer-cell growth. Various studies over the past few years have clearly outlined the health dangers associated with this chemical.(1)

Don’t forget, the government and corporations used to tell us that asbestos, PCB’s and DDT were all deemed safe and effective, yet all of these chemicals have since been banned.

Triclosan can also pass through the skin and interfere with hormone function (endocrine disruption). (2)(3) It doesn’t stop there, a study published in the journal Environmental Health Perspectives from 2008 shows how scientists detected triclosan in the urine of nearly 75 percent of those tested (2,517 people age six or older). (4)

The Canadian Medical Association has even called for a ban on products that contain Triclosan. (5)

Colgate says that the chemical is safe, in doing so they cited the Food and Drug Administrations (FDA) process that led to its approval in the first place. But according to Bloomberg:

“A closer look at that application process, however, reveals that some of the scientific findings Colgate put forward to establish triclosan’s safety in toothpaste weren’t black and white — and weren’t, until this year, available to the public.” (source)

Believe it or not, these documents were actually withheld from public viewing by the FDA. It’s also important to note that major corporations and the FDA are pretty much the same thing, and these corporations have a big influence over government policy. The only reason that the documents were recently released is because of a lawsuit that was filed over a Freedom of Information Act (FOIA) request.

The FDA report raised concerns that the chemical could cause cancer. You can view the release of the document HERE.

“The pages show how even with one of the U.S.’s most stringent regulatory processes — FDA approval of a new drug — the government relies on company-backed science to show products are safe and effective. The recently released pages, taken alongside new research on triclosan, raise questions about whether the agency did appropriate due diligence in approving [Colgate] Total 17 years ago, and whether its approval should stand in light of new research, said three scientists who reviewed the pages at Bloomberg News’s request.”(source)

Despite all the evidence, Colgate still maintains that everything is fine and there is nothing to worry about. Will you believe them? Will you continue to put your trust in these corporations instead of doing the research yourself? By now it’s clear that these corporations are not really concerned with safety or care, but more so about profit and making people sick, as well as contributing to the concealment of scientific data. The same shareholders that own these companies who are behind the distribution of these products are also holding major shares in various drug companies. There is profit to be had from making people sick.

Colgate has said that it has no plans to reformulate the toothpaste.

It’s remarkable how easy it is to head over to the drug-store to pick up cosmetics, household cleaning products, soap, shampoo, toothpaste and other necessities without ever thinking about how it’s made, what goes into it, the science behind it and the health hazards that are associated with doing so.

More information is coming to light, especially within the past few years. The rate at which people are waking up and starting to critically question what we choose to surround ourselves with on a daily basis is increasing exponentially. Most importantly, people are starting to make better choices.