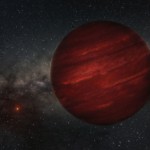 photo credit: Lucas Granito Artist’s impression of GU Psc with its parent star a dot barely distinguishable from other stars

The catalog of planets beyond the solar system has a strange new member, one which may make us rethink our ideas of stellar system formation, as well as opening new paths for planetary searches.

GU Psc is a fairly unassuming star. At a third of the sun’s mass, and a tiny fraction of the brightness, it is not the sort of star that gets noticed. Being 155 light years away it is close in astronomical terms, but not close enough that it draws attention the way some of its fellow M type stars do.

Now however, it has turned up something distinctive, a planet orbiting 2000 times the distance between the Earth and the Sun, a gap so great the last time the giant planet was at in its current position the Earth was less than half way through the most recent Ice Age.

“GU Psc b is a true gift of nature. The large distance that separates it from its star allows it to be studied in depth with a variety of instruments, which will provide a better understanding of giant exoplanets in general,” says Rene Doyon, director of the Observatoire Mont-Megantic and one of the supervisors of the Marie-Eve Naud, the PhD student who discovered it.

Naud was conducting a study of the AB Doradus group of stars. This is a collection of 100 million year old stars that formed together and continue to travel on broadly similar paths. One theory holds that the members formed with the famous Pleiades cluster before becoming separated.

With such young stars there it is sometimes possible to observe planets directly, rather than having to detect their effects on the parent star, either when they block out some of its light in passing or through gravitational tugging. Gravitational energy is released as heat when planets accumulate mass, and early in a system’s formation planets can still be hot enough to glow in the infrared without any significant warming from their star. Those planets that are sufficiently far from the parent star can sometimes be photographed with infrared telescopes, the best such photograph yet having been released yesterday. At 800° C and such an enormous distance from a faint star GU Psc was an easy find.

However, while Naud hoped to find planets circling members of the AB Doradus group, one at such a distance was a surprise. Moreover, it was not an outlier within a large group. “We observed more than 90 stars and found only one planet, so this is truly an astronomical oddity!” says Etiene Artigau, Naud’s other supervisor.

The discovery was reported in The Astrophysical Journal where the mass is estimated at 9-13 times that of Jupiter, based on its brightness and the age of the star system in which it sits. More massive planets cool down more slowly so the temperature is a good indication of size.

While such objects are clearly very rare, something so far from its parent star is relatively easy to detect, since we don’t have the same challenge of blocking out interfering light. The discovery has sparked hopes that smaller telescopes could be used in the quest for future examples. Theorists will also be keen to work out how such a distant planet could have formed – twice as far out as any other known exoplanet.
by TaboolaSponsored ContentFrom The Web