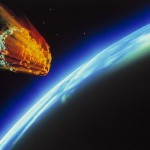 An asteroid the size of a bus came to within 186,000 miles of Earth – a close shave in cosmic terms – on Saturday morning.
The recently-detected asteroid HL129 was closer to Earth than the Moon – which is on average 238,855 miles away from our planet – on its closest approach at 4.13am.
The asteroid is about 7.6 metres wide, according to NASA’s Asteroid Watch project based at the agency’s Jet Propulsion Laboratory in Pasadena, California. Looming: This Nasa video shows HL129 on its approach to Earth. The bus-sized asteroid came closer to Earth than our own Moon Hair’s breadth: The asteroid closes in on Earth, eventually passing by to within just 186,000 miles of us
An asteroid of that size would cause significant damage if it impacted a major city, potentially hitting with the impact of a nuclear bomb roughly half the size of the one that hit Hiroshima in 1945.
The asteroid was discovered on Wednesday, April 28, by astronomers with the Mount Lemmon Survey team, according to an alert by the Minor Planet Center, an arm of the International Astronomical Union that chronicles asteroid discoveries, reports Space.com.

NASA scientists and researchers around the world constantly monitor the sky for asteroids that could hit the surface of the planet.
Startling new research has revealed just how vulnerable our planet is to asteroid impacts.
A trio of former astronauts has announced we’re up to ten times more likely to be hit than previously thought – and warn the only way we’ve avoided disaster so far is through ‘blind luck’. Stark reminder: A meteorite contrail is seen over Chelyabinsk in Russia in February. It caused sharp explosions and reportedly injured around 100 people, including many hurt by broken glass.
However, the majority of the impacts occurred either high up in the atmosphere, or in unpopulated areas including the Atlantic and Pacific Oceans.
Despite the majority of impacts occurring in water and high up in the atmosphere, a number have taken place on land.
The Chelyabinsk meteorite flew above the Russian city in 2013. The impact injured hundreds of people and served as a reminder of how deadly incoming space rocks can be.
Asteroids hitting the Earth caused 26 nuclear-scale explosions between 2000 and 2013, a new report has revealed.
Some were more powerful, and in one case, dozens of times stronger, than the 15-kiloton atom bomb blast that destroyed Hiroshima. Despite the majority of impacts occurring in water and high up in the atmosphere, a number have taken place on land. Pictured, an illustration of an asteroid on its way to Earth
Three former astronauts supporting the B612 Foundation – a private company devoted to protecting Earth from asteroids – presented the data.
The impacts were recorded by the Nuclear-Test-Ban Treaty Organisation which operates a global network of sensors listening out for nuclear weapon detonations.
Most occurred too high in the atmosphere to cause any serious damage on the ground.
But the evidence is a sobering reminder of how vulnerable the Earth is to the threat from space, say scientists.
The most dramatic impact by an asteroid or comet in recent times occurred when an object exploded over Tunguska, Siberia, in 1908 with an energy yield equivalent to between 5,000 and 15,000 tons of TNT.
An area of forest covering 770 square miles (2,000 square km) was flattened by the blast.
The horrifying prospect of an asteroid hitting the Earth was the subject of the hit movies Armageddon, starring Bruce Willis, and Deep Impact, starring Morgan Freeman.