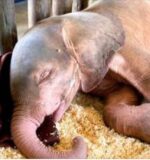 In 2020, an albino elephant calf has been saved from a barbaric snare that kept her trapped for four days, according to reports.

The calf sustained horrific injuries as a result of the trap, including a Joker-like scar on her face and severe lacerations to the back of her ears and neck.

The young elephant, a female named Khanyisa, was born with a unique pink hue to her skin, as opposed to the grey color the animals usually sport.

It’s said she was discovered entangled in the snare at a private reserve close to the border of the Kruger National Park in South Africa.

Khanyisa was all alone when she was found, and had suffered terrible wounds. Along with lacerations on her ears and neck, the snare had tangled around her face, cutting into both cheeks and her mouth. As a result, the calf was left with injuries so bad that maggots had began to eat the decaying flesh, opening up gaping holes in her mouth.

Thankfully, Khanyisa was saved from her ordeal by elephant orphanage Hoedspruit Elephant Rehabilitation and Development (HERD). She’s now on the path to recovery at her new home.

Sue Howells, working with HERD, said: “She looked so innocent, fragile and pure, and yet so brave – a unique beauty who had been sadly mutilated by the hands of man.

“We knew we had to help her and protect her and give her a place of safety that she never has to endure such trauma again.

“Khanyisa is an exceptionally strong and brave little elephant.

“She is incredibly resilient and has what seems to be an uncrushable spirit.

“Her sweet, fragile and thoughtful personality shines through her toughness, despite everything that she has endured at such a young age.”

The orphanage now housing Khanyisa was built to rehabilitate elephant calves displaced or orphaned, so she’s in good hands. Since 2020, she’s been steadily integrating with the Jabulani Herd, a group of 15 elephants who live on the grounds of Kapama Reserve, close to the National Kruger Park. According to her rescuers, she’s been accepted by them unconditionally.

Khanyisa, meaning light/sunshine, is now healthy and lives a good life – thanks to all the people who stood up for her and helped her!

How can anyone hurt such a beautiful baby, glad he’s OK and doing well!

We’re wishing Khanyisa the best possible life for the future and want to send our thanks to those who helped her!