After a little girl takes a sudden spill at the Smithsonian’s National Zoo, one playful sea lion strikes a concerned pose. 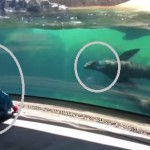 One little girl has a sea lion wrapped around her tiny finger.

Or at least that’s what it looks like in a popular video, in which a young girl is seen running back and forth along the sea lion wall enclosure at the Smithsonian’s National Zoo in Washington D.C. while a sea lion swims back and forth excitingly following her.

While similar scenes may play out at zoos across the country frequently, the video takes an adorable — and most likely painful — turn when the girl takes a tumble.

The sea lion immediately stops playing and hovers against the glass to see if its little friend is okay.

Ariel Myren was in the exhibit, noticed the playful interaction and recorded the fall on video, although she doesn’t appear to have any relation to the girl. While the clip was posted a year ago, it recently went viral again after getting attention on Reddit. TODAY.com reached out to Myren for further details on the video but did not get a response.

“He’s worried about her,” one fellow zoo visitor is heard saying in the video.

It looks like this tiny tot has a loyal friend in the animal kingdom.