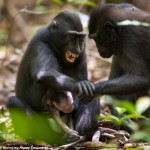 This is the heartbreaking moment a female macaque monkey cradled her dead baby in her arms.
The grief-stricken mother spent days carrying around the tiny newborn at Tangkoko Nature Reserve and National Park in Sulawesi, Indonesia.
She could be seen tenderly cradling her baby – before fending off a male macaque who tried to reach out and touch it. Heartbreaking: A female macaque cradles her dead newborn baby in her arms at an Indonesian national park
The poignant moment was caught on camera by wildlife photographer Andrew Walmsley, 31, who described it as ‘very hard to watch’.
Both mother and newborn are crested black macaques, which are classified as Critically Endangered due to hunting and habitat loss.

Footage shows the female macaque spending days looking after her baby, who passed away just a few weeks after its birth.
She can be seen pressing her child tightly against her chest, before grooming, sniffing and gazing mournfully at it. Grief-stricken: The mother spent days carrying around her tiny child at Tangkoko Nature Reserve and National Park in Sulawesi. She even fended off a male macaque who tried to reach out and touch the baby (pictured) Tragic: The poignant moment was caught on camera by wildlife photographer Andrew Walmsley, from Oxford
She even pushes away another male macaque who tries to reach out and touch the baby, while baring her sharp teeth at him.
Mr Walmsley, from Oxford, said he and a team of researchers had first spotted the grief-stricken mother clutching the baby to her chest at around 11am.
‘I first saw the mother walking past me and noticed that she was clutching something to her chest, but that the legs were dragging against the ground, not gripping her belly,’ he said.
‘She sat alone, cradling her baby, looking down at it and not moving for maybe 15 minutes.

‘You realise there’s so little difference between us and them when you see that kind of behaviour.’
After Mr Walmsley left the national park, the macaque continued to carry her dead newborn for two days, before finally letting go of it.
Tangkoko Nature Reserve and National Park is the main stronghold for the remaining population of crested black macaques.
The main threat to the species is from humans hunting them for bush meat, which is considered a delicacy in Indonesia for special events such as Christmas and Easter.