A Maniac Set Her On Fire. 2 Years Later, She Removes Her Mask And Shows Her New Face 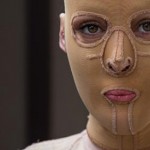 I Was taught to appreciate every moment of my life, because your everything can change in the blink of an eye.
Dana Vulin, 28, of Perth, Australia had her entire life change completely when she suffered horrific third-degree burns on nearly 60% of her body — the result of an attack from a woman who was jealous that Dana had talked to her husband at a party. She told Dana she wanted to ruin her “pretty little face.”

Dana is one of those incredible people who did not let depression and fear set in. She continued on with her head held high — much like Rebekah Gregory DiMartino, who lost a leg in the Boston Marathon attacks but still finds joy in life.

After numerous reconstructive surgeries, Dana was finally able to take off her literal mask and reveal her new face. Dana isn’t concerned about looking different. As she told Australia’s Channel Seven’s Sunday Night, “I hope they see the scars. This is part of me now.”

Her transformation is absolutely incredible, but it’s her inner beauty and determination that we most respect.