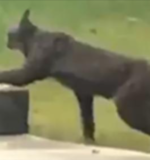 Black Canada lynx are so rare they have never been captured on camera. Until now.

An extremely rare sighting of a melanistic Canada lynx (Lynx canadensis) has been captured on camera – something that has never never been done before.

Thomas Jung, a researcher at the University of Alberta, filmed the animal in a residential area in the Yukon, Canada, using his smartphone. The lynx appeared to behave calmly, despite the noise of human activities and the sound of a dog barking nearby.

The experts who have studied the footage confirmed it is a Canadian lynx, and not a bobcat (Lynx rufus). “It had a black coat containing whitish gray guard hairs throughout, as well as whitish gray hairs in the facial ruff and the rostrum and dorsal regions,” Jung said in a statement.

Melanism – an increase in the body’s production of melanin, the pigment responsible for color – is relatively common among cats, with about a third of all felid species reported to have a melanistic polymorph. Black panthers, for example, are just melanistic leopards or jaguars. These kinds of genetic mutations can either be beneficial to the animal (adaptive) or have a negative effect (maladaptive).

Color polymorphisms in the genus Lynx has only been observed a few times. The adaptive significance of melanism in lynx is unknown, but the loss of camouflage when hunting during winter is likely maladaptive, according to Jung. This means that the dark coat could put the animal at a disadvantage when hunting hares against a snowy landscape. Snowshoe hares (Lepus americanus) are the staple food for Canada lynx living in the northern section of their range that stretches mainly across Canada and Alaska, bordering some northern US states.