888,246 Poppies Pour Like Blood From The Tower of London To Remember The Fallen Soldiers of WWI 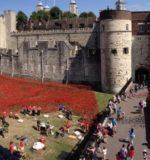 It’s paint, it’s blood, it’s poppy flowers! On August 5th, in honor of the 100-year anniversary of the First World War, the Tower of London has something truly incredible planned. Thanks to designers Tom Piper and Paul Cummins, the “Blood Swept Lands and Seas of Red” demonstration will be breathtaking on multiple levels.
888,246 poppies to be exact, will be perfectly displayed around the Tower of London so that it looks like a sea of red blood flows out of the tower and down below. While a beautiful sight, it is also sad, as each flower represents a lost British or Colonial military personnel from World War I.

The event will be held as a form of education, remembrance, and to help raise funds for those that have served, or are currently serving in the military. Check out these amazing photos of the ceramic flowers, all of which will eventually be offered for sale–I want one! A Roll of Honour will be called at the event. In which, 180 names will be read, each one representing a lost soldier from World War I. The names will be chosen according to public nominations held through the historical Royal Palaces organization website. Poppies are a symbol used to convey sleep, peace and death. This has to do with the sleep-inducing opium that can be derived from the poppy flower, as well as their deadly blood-red coloring. Poppies also represent remembrance of a passed loved one and have been used in funerals since the Roman Era, and likely well before.

The flowers for this event were are not all planted, or rather placed, at once. Instead the first flower was planted on its own day, and each day thereafter the collection of ceramic red flowers continued to grow.

The red ceramic flowers are placed around the castle’s well-known dry moat by a group of 8,000 unpaid volunteers.

A variety of ‘planting’ measures were taken to place each of the flowers in their rightful place. Some of the flowers are positioned so that they appear to be falling directly out of the tower, like a blood soaked waterfall.

Other flowers are planted into the dry moat ground surrounding the towers. And yet more flowers are draped over lovely iron arches throughout the property. This summer people can come to the Tower of London to see the sights for their own eyes. The perfectly adorned landscape of poppies gives visitors the chance to personally reflect and give tribute to those they knew and those they did not know.

For all generations there is plenty of opportunities for learning all around. After all, the best way to prevent the pitfalls of history from happening again is to keep spreading the knowledge of what has happened in the past.

The final poppy flower will be planted on November 11, 2014, as a symbolic gesture for Armistice Day, also known as Veteran’s Day.
The ceramic flowers are hand-crafted by Paul Cummins, an artist quickly gaining notoriety, largely for his incredible ceramic flowers. His ceramic creations can be found in homes and offices all around the world, and some of his greatest clients have some pretty well-known names.

Other big projects Paul has been hired to work on include, the Duke of Devonshire’s Chatsworth House, Derby Royal Hospital, and the Bienheim Palace, among others. Those in attendance have the opportunity to purchase one of the ceramic poppy flowers, which will be sold for 25 euros per beautiful bloom. Having a ceramic flower from this event is exciting enough, but the best part is all profits go to benefit 1 of 6 different charities for service men and women.